There is nothing quite like the buzz that surrounds a highly anticipated project like the new Academy Museum of Motion Pictures, opening this week on Miracle Mile in Los Angeles with much fanfare and international press coverage. The 300,000 square foot venue features the 1,000-seat David Geffen Theater, 288-seat Ted Mann Theater, Shirley Temple Education Studio, and exhibition spaces that showcase treasured artifacts and memorabilia from cinema classics such as The Wizard of Oz, Jaws, Star Wars, E.T., and more. The Academy Museum pulls back the curtain of Hollywood’s past, present, and future, providing a glimpse into the filmmaking process and the innerworkings of the film industry.

This is the first museum commissioned by the Academy of Motion Picture Arts and Sciences, which revitalized the historic Streamline Moderne building that has been dormant for nearly two decades. Jaffe Holden provided architectural acoustics and audio/video design services within the challenging spaces, working closely with the full project team that included industry heavyweights Renzo Piano Building Workshop, Gensler, Buro Happold, WHY Architects (exhibit design), and Paratus Group.

The theaters have been designed to the utmost quality sonically and visually, enough so to meet the highest industry professional standards. Both the Geffen Theater and the Ted Mann Theater are designed to be the finest screening rooms in the world, the locations of future movie premiers with professional audiences who have impeccable standards for acoustics and audio/video design. These theaters will also be accessible to the general public, allowing both amateur film buffs and industry professionals to experience superior quality sound equal to that of a dubbing stage where the final editing of a film takes place. There is not a single bad seat in the house, with multi-speaker arrays that project evenly to the entire audience and bespoke acoustic designs that make the sound exuberate throughout the space.

Our work was not done in a vacuum; we worked on a weekly basis with the Academy leadership and technical staff for years to bring this project to fruition with the most advanced acoustics, audio, and projection technology. The latest innovations for AV systems and projection systems were implemented from top manufacturers (Dolby, Christie, Meyer), and in many cases these technologies were developed and honed in parallel with the design of the Museum. Dolby graciously donated most of the equipment for this monumental project of historical significance. All design work was given the blessing of the Technical Standards Committee at the Museum, as well as the Academy’s Science and Technology Council, with active participation from specialists employed by organizations like NBC/Universal, Sony Pictures, Twentieth Century Fox, Walt Disney Company/Pixar, and Warner Brothers.

Inclusive audio design and accessibility was a priority for every space involved in this project in order to provide a robust experience for all. Induction loop systems enable sound to be beamed directly into hearing aid devices through a magnetic field within the theaters, public spaces, and the ticket and information booths. Assisted listening systems are integrated into the museum exhibits, enabling sound to be transmitted directly into patrons’ hearing aids and eliminating the need for lanyards or other accessories. 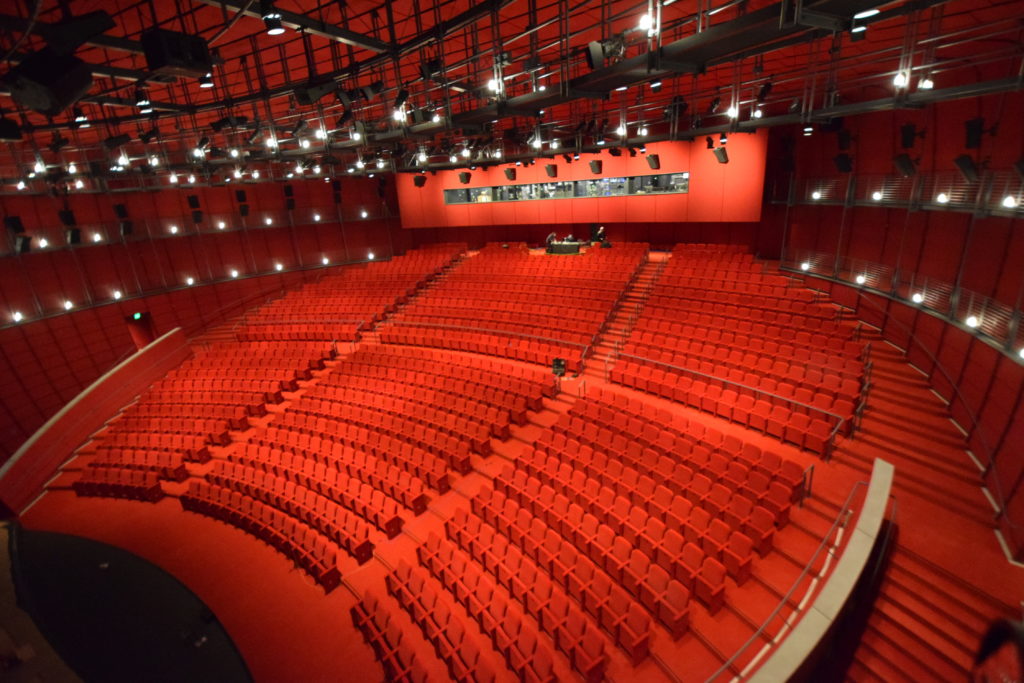 The 1000-seat Geffen Theater is planned to be the most flexible and highest quality screening and film/video space ever built. Our firm designed a stage that will enhance both amplified and natural acoustic performers, which was a colossal challenge as each type of programming has its own requirements. The stage will have the ability to accommodate a variety of ensemble sizes and configurations. The design directive of Renzo Piano for the Geffen Theater was to express and celebrate the functionality of audio/video systems and to “reveal the machine.” All equipment is exposed in plain view and contrasted by the red theater, which features a double-curved baffled wall and tall columns of speakers for more articulation and control of the sound. We worked with Dolby to develop a custom Atmos system that accommodates the non-traditional architecture of this space. This highly advanced system is more complex than any other in existence, with more than 40 surround speakers and subwoofers mounted to overhead beams and catwalks and placed behind the curved screen to bring full bandwidth reproduction around the audience. 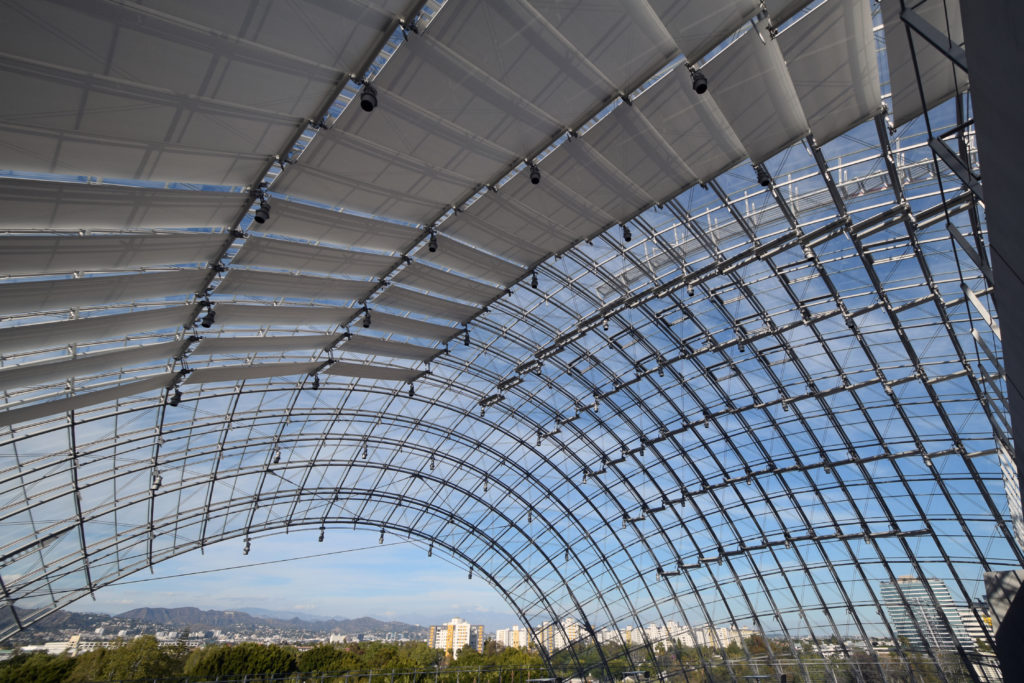 Surrounding the theater is a new spherical glass addition, 150-feet in diameter, encasing a rooftop terrace that provides panoramic views of Los Angeles and the famous Hollywood sign. We ensured appropriate sound isolation between the Geffen Theater and the rooftop terrace located directly above the theater, which will be the venue for various events. 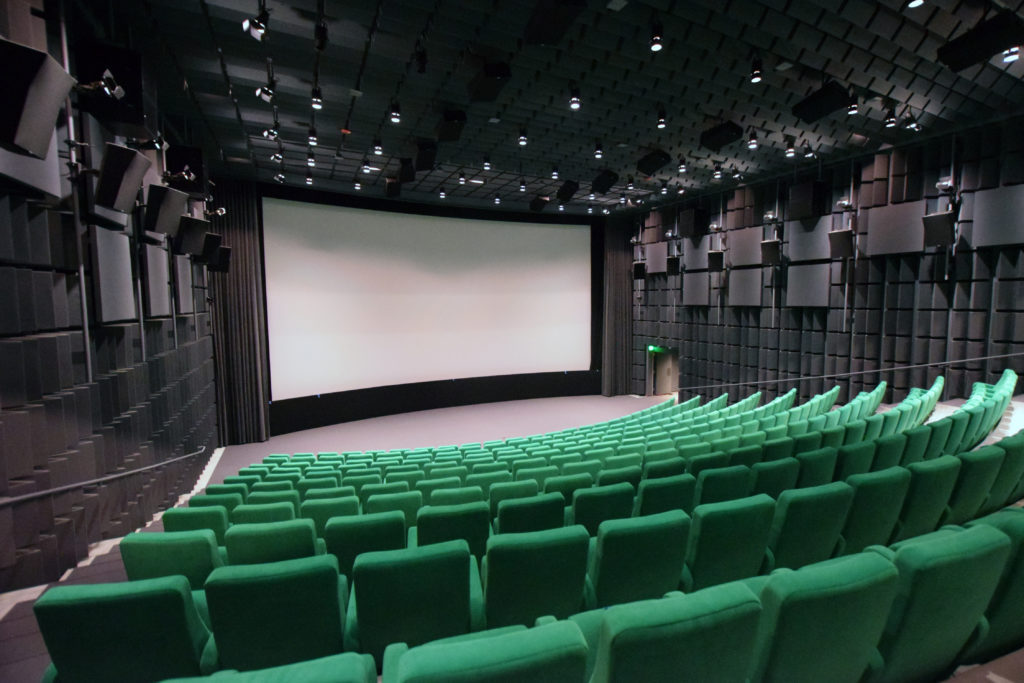 The 288-seat Ted Mann Theater is a multipurpose space that will serve many functions, including film screenings, director talkbacks, panel discussions, and lectures. Utilizing an acoustically box-in-box construction, this theater has many of the same technical features as the Geffen Theater, including double-paned glass surrounding the projection room in a V-shape to minimize glare and isolate sound between the audience and the production. As with the Geffen Theater, underneath the Ted Mann Theater is a large plenum space with noisy mechanicals and air distribution systems. Because these theaters had to be designed to the same standard as world class concert halls, sound isolation was crucial in our design. We overcame these challenges to eliminate the faint rumbling of an HVAC system like you would hear in a noisy cineplex in the middle of a hot summer. These spaces are designed intentionally so that every nuance of a film’s sound is audible, as the director and sound designer intended when creating their finished product.

Within the central area of the Academy Museum is a vertical circulation space called “The Spine,” a lively hubbub of activity and reverberant sound. Custom acoustical materials allow this main area to retain its natural energy, with more sound isolation incorporated into the subdued spaces that lead into the quiet galleries and exhibits of the museum. Acoustic treatments were also applied to the gallery and exhibit spaces, which highlight everything from the most celebrated milestones in cinema history to more dark and controversial moments in Hollywood. In addition to the core historical exhibition and rotating temporary exhibitions, the Museum will offer public programming that includes screenings, premieres, panel discussions, gallery talks, and K-12 education initiatives.

At the core of the Museum’s education program is The Shirley Temple Education Studio, providing opportunities to students from diverse backgrounds through its teen initiative and offering hands-on workshops to the public. Thanks largely to a gift from the family of Shirley Temple Black, which included a financial donation as well as key artifacts from her career, the Academy Museum will be able to inspire a new generation of creators through its community outreach, inclusivity, and educational mission.

Learn more about the museum at academymuseum.org