As leaders in the field of high-performance AV systems, manufacturers frequently solicit Jaffe Holden’s input on what features and improvements can be made to their products to better suit our needs and the needs of our clients. Most of the time, these are small and go generally unseen to most people who aren’t “under the hood” of the AV system. However, a new wave of projection technologies coming to the prototype phase has been unveiled at InfoComm’s annual convention. Ben Bausher, Associate Principal of Audio/Video, explains how this new tech can add flexibility and ease of use for clients and end users. 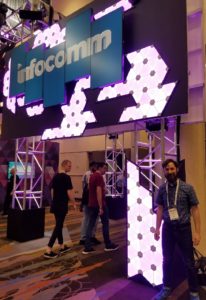 For a few years, the cinema market has had projection systems that use “remote head” projection systems. That is, the light source and the projector “head” that contains the lens are in physically disparate locations. However, the projector heads are the same size as their traditional counterparts to facilitate easy swap-out of the new units and their cost has been extremely high. We requested that this technology be scaled down for live production use, and are now seeing results. The newest tech will allow up to 60,000 lumens to come out of a single projector head that is barely larger than a 18-24” cube. See the image below, with water bottle for scale. 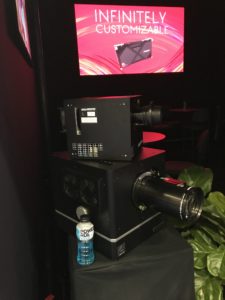 Projector Head with Bottle for Scale

Comparatively, this is nearly as small as a theatrical lighting fixture, so it will be much less visually obtrusive. These projector heads also have the promise of greatly reduced acoustic output, so troublesome projector enclosures or the requirement of mounting them within control booths may become a thing of the past. Additionally, a single light source can be used to power multiple projector heads, making large projection-mapping installations easier to deploy.