New York University has named its new performance space at 181 Mercer Street, “The African Grove Theater,” in honor of the first Black theater in the United States. This announcement comes right in time for Juneteenth, a federal holiday on June 19th commemorating the emancipation of enslaved African Americans that is often observed for celebrating African-American culture.

It is a privilege for our team to provide the acoustics and A/V design services for this historic project of such cultural significance, highlighted recently in The New York Times. Join us in celebrating Juneteenth with this recognition of Black history in America.

“The original African Theater was started in 1816 by William Alexander Brown, a retired ship steward who started hosting music, poetry and short plays for Black New Yorkers in his backyard at 38 Thomas Street. The entertainment “tea garden” became known as the African Grove, one of the few spaces where Black patrons could enjoy leisure arts.

In 1821, the theater moved to Bleecker and Mercer Streets — where the new performance space will stand next spring — expanding to a 300-seat venue known for staging operas, ballets and Shakespearean classics alongside original work, initially performed by Black performers for Black audiences and, later, integrated audiences.

The original venture was not entirely peaceful. The theater faced harassment from white rivals and police raids. A yellow fever epidemic further ravaged the theater, which closed two years later. The last known playbill for an African Theater production was dated June 1823.

The new theater will be a ‘space where we celebrate another tradition in the culture of New York City that has often been disregarded and overlooked and not understood,’ said Michael Dinwiddie, an associate professor at N.Y.U.’s Gallatin School of Individualized Study, who is also a theater historian and co-chair of the Committee to Commemorate the African Grove. ‘This was a theater that in its early time, was really creating a model for what the American theater could be. And that’s what we want the modern African Grove Theater to be.'” 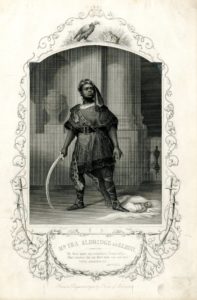