In anticipation of the upcoming University of Georgia Performing Arts Center 25th Anniversary Gala, Russ Cooper spoke with their Director of Marketing and Communications Mark Mobley earlier this month about working on one of the finest performance facilities in the South. The following is a transcript of their conversation which is featured in the gala program booklet.

In the mid-1990s, Cooper was on one of his first projects with Jaffe Holden, designing the sound of Hodgson and Ramsey Halls at the UGA Performing Arts Center in conjunction with Craig Gaulden Davis. That Greenville, S.C. architectural firm worked with Thompson, Ventulett, Stainback & Associates (now TVS) to build not only the Performing Arts Center but the Hugh Hodgson School of Music and the Georgia Museum at Art – known collectively at the time as the Performing and Visual Arts Complex.

Mobley: When did you come into the process of the design of the halls here?

Cooper: I had worked with Craig Gaulden Davis, who was co-architect with Thompson, Ventulett, Stainback in Atlanta, previously on the University of South Carolina School of Music. So they teamed up and brought us in as part of the team to win the project. Thankfully, they did it right and had the acoustician on board from the very beginning. That involved the programming meetings and talking to the faculty and the administration, as to what they wanted, which is very important to understand, because you have to design the acoustics to the program.

Mobley: What steps do you take as you’re working with the project architects? How do you begin influencing the sound from the very beginning?

Cooper: Well, the key is a good team. The architect trusted us. It’s clear that the school wanted a classic kind of hall that could entertain the likes of the Atlanta Symphony and student organizations. And then the question came to seat count, how big you want the hall to be. And it came to a sweet spot of 1100, 1000 seats, somewhere around there, 1200 seats, which really makes our work much easier.

The shape of the room is what we call a shoe box. The design was based off the Musikverein Hall in Vienna, and a little bit off Boston Symphony Hall, but mainly the Musikverein because it has a gallery around the stage, not as extensive as what you have, but the shape is a well-loved shape, very good acoustically. We took that shape and shrunk it down, knowing that the shoe box shape is great because it provides sound reflections off parallel sidewalls and a ceiling plane.

That being said, the height of the hall is pretty tall at about 60 feet. If that had just been like it is without any kind of reflectors in there, we believe that would have made the onstage hearing of the orchestra harder to accomplish. The canopy we thought was necessary because of the student performers wanting to hear themselves, as well as reflecting sound out in the audience.

Mobley: One of the magical things about Hodgson Hall is that it sounds like a classic 19th century hall that has all the bric-a-brac and angels and sculpture and all that stuff that reflects sound, but it’s largely stone. It’s not wood, it’s not plaster, it’s stone. The puzzle to me is how the hall sounds so warm and enveloping when it’s a whole bunch of what is essentially cinderblock.

Cooper: Yeah, well the great halls are not wood, either. They may look like wood, but they’re not. Boston, Vienna, they are plaster, right, which is very, very reflective and over time, gives that warm kind of sound. And we couldn’t afford plaster here. It’s a very expensive material because there’s a lot of labor involved with laying up plaster and all that. It’s kind of a lost art in the United States to do a really fine plaster finish.

The cinderblock came out of our recommendation that it needed to be massive. We thought that was a good choice to at least provide a mass for the room to reflect sound. The thing with cinderblock, if left untreated, is it can be sound absorptive because it’s porous. If you look at cinderblock up close, it’s been unpainted, there’s little teeny holes in it. So I said, ”Well, Mr. Architect, we’re going to have to seal up the cinderblock and paint it.” And I remember the architect telling me, “Well, we don’t like the look of that in the main hall.” So I said, “We’ve got to seal it up with a clear sealer.” And so this was a big, big deal. It’s interesting that you picked up on it.

Mobley: Were there any things that you did that were state of the art at the time and have aged well?

Cooper: There were a couple innovations with this project. The canopy with what I call the contact lens shape had only been used by our firm, and it was used at the Denver Concert Hall, which is a fully surround hall and at our hall in Mexico, and which was more akin to what you have, where the rear of the stage had choral seating. What that canopy actually does is help reflect sound back to those people.

I believe it was the first hall that the sliding panels had been done in that manner for adjustable acoustics. A lot of the adjustable acoustics before then had been done with curtains or banners, and this architect wanted to have a more finished fabric look. So in between those pilasters, I suggested telescoping banners, which are like curtains that run vertically. I’ve got to ask you, Mark, do they still use them?

Mobley: Yes, we do. And there’s a large amount of recording that goes on here for Performance Today. So a lot of people know how good the hall sounds – even people who’ve never been here before. 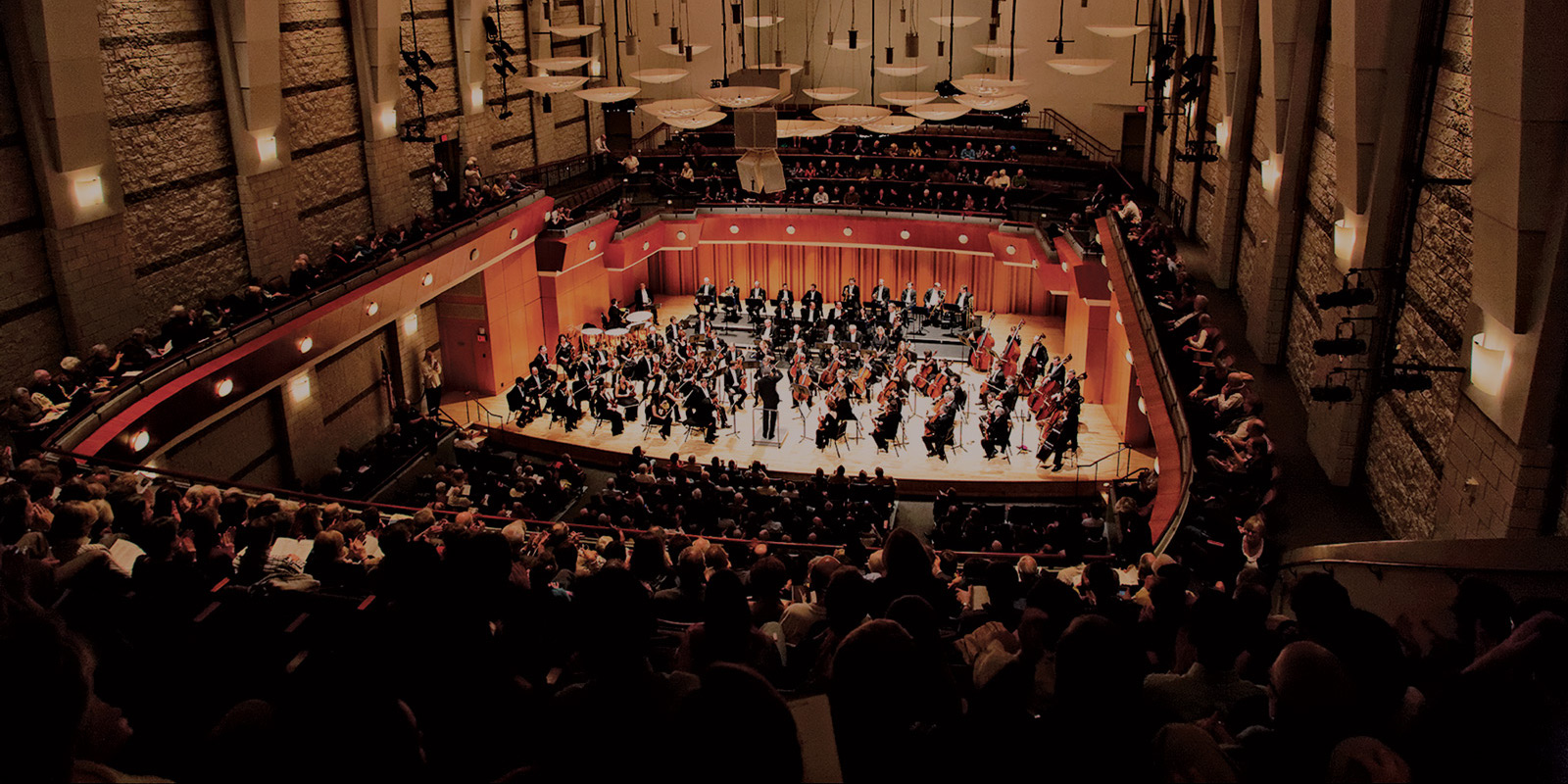