A cool new buzz word among designers and programmers of centers of learning and related venues is Orange Space. The term is commonly used to designate an area on early blueprints or floor plans that lack a designated application; in other words, they have not been programmed as formal collaboration/learning spaces. But as universities, colleges and schools are now realizing, such spaces offer creative possibilities within a mixed-use campus. With our wide range of experience and expertise, we can suggest how these left-over spaces can be repurposed and become a useful addition to a planned development. The use of simple yet effective acoustic treatment and clever audio/video systems can make a big impact on the overall usability of a space. It is worth stressing that by thinking through such possibilities at the start rather than the end of a new project, you have the opportunity, for example, to add windows to such spaces and expand their versatility.

Our primary focus, based on experience gleaned during hundreds of design projects, is to suggest how these undesignated Orange Spaces can be re-purposed to heighten the community feel for a campus, in addition to ancillary uses. One example might be repurposing unused or underutilized areas as a Green Room for performers and faculty staff, with the addition of a modest AV system and basic acoustic treatment. In another example, we noticed that within a planned academic building there was a long corridor running along a row of faculty offices. We suggested that the college create lounge areas in several of the rooms opposite these offices, equipped with white boards and decorated as a student hang-out. Here, we envisioned that students and faculty could interact more freely with one another and create an enhanced sense of community on campus. The conversion was not expensive against the project budget, but encouraged a greater sense of harmony during casual encounters between the building’s occupants. 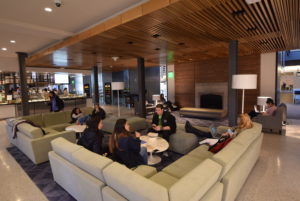 We have also repurposed a former open lounge into a space that is suitable for performers who might want to run an impromptu class; we added some inexpensive acoustic drapes to deaden the room and reduce reverberation. We also specified a relatively simple infrastructure with CAT-5 cabling to allow participants to used laptop computers with an inexpensive video projection system for PowerPoint presentations and the like. As with the student lounges, a key to our proposal was to provide extra flexibility that would encourage student/staff engagement within the space. 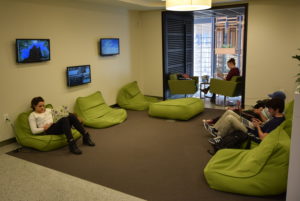 Generally, we suggest that several key Orange Spaces could be re-purposed to help fulfill growing creative requirements within a student-centered learning environment. This often leads to the design of comfortable and welcoming spaces that provide a much-needed home for students, and at times, a prominent feature of the new building. For example, offices can be re-designated as Tutorial Spaces in which one or more students can meet with faculty – or faculty members meet with each other – and engage in academic discussions. And spaces located outside research laboratories can be repurposed to provide areas in which research students can perform data analysis, staff interaction, student collaboration or just downtime. Other Orange Spaces can be designed as informal meeting spaces.

During another project at a Texas college, using our experience and expertise working with a full-design team we repurposed a covered outdoor area into a meeting and performance area with the addition of a portable AV system. Faculty and students appreciate the extra creative opportunities offered by the converted Orange Space, as well as attracting outside performers to their campus. Finally, a private university in North Carolina repurposed an air-conditioning chiller room and a mechanical area into finished spaces for campus initiatives; such solutions are ideal for learning institutes that have limited available space, or where the building of a new facility is not financially viable. All in all, the provision of a different range of spaces in academic buildings of all types has proven to be instrumental to their success.